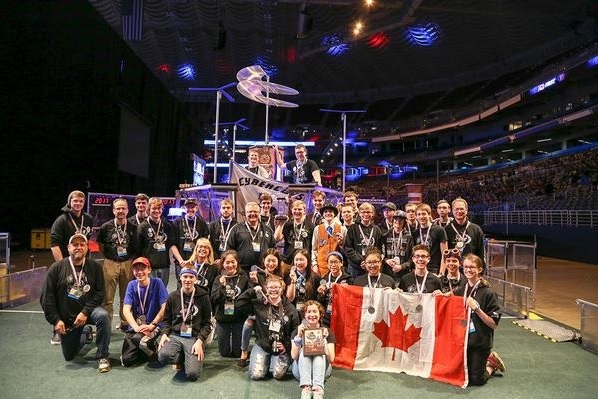 FERGUS - A student-built robot took a group of local students and their Woodland Christian High School classmates to the FIRST Robotics World Championships in St. Louis Missouri in April.

Among the students from the Breslau private school was Grade 11 student Liam Easterbrook from Ennotville.

"The school I go to has a robotics club," he said. "It's school-based so when I saw that they had this I thought it was really cool so I decided to sign up."

The way the FIRST (For Inspiration and Recognition of Science and Technology) Robotics competition works, Easterbrook explained, is the school spends September to December working on sponsorships and training new students on the ins and outs of robot construction.

The CyberCaves, the Breslau school's team, was made up of 36 teachers, mentors and students this year.

On the first Saturday of January, Easterbrook said, the FIRST Robotics Competition releases the game format for the year and each competition follows that same model.

"After they reveal this challenge you have ... officially six weeks to build a robot that can do the tasks in the challenge," Easterbrook said. "And then after that competitions start up ... in universities around Ontario and depending on how you do there you can compete to go to the world [championships] which is in St. Louis."

This is the team's third appearance at the World Championships. This year there were 39 countries represented at the three-day event, with 30,000 youths representing 1,394 teams.

The CyberCavs travelled to St. Louis on April 26.

After round robin matches the team was ranked 52nd out of 68 teams, but was chosen by the third-ranked team to form an alliance along with one other team. The three teams played together in the quarterfinals.

The alliance won the quarter and semi-finals, but after losing two matches in the finals, they were eliminated.

For the first 15 seconds of each match the robots must work autonomously based on pre-programming, but for the next two and a half minutes two "drivers" take over the controls and navigate the robot for the rest of the match.

While Easterbrook tried his hand at driving in Grade 10 he said it wasn't his forte.

Instead he applies his knowledge to the construction of the robot.

"Being one of the older members of the team I have a little bit more responsibility than people in Grade 9, Grade 10 - so I'm kind of one of more of the leaders," Easterbrook said.

"Currently I help with a lot of manufacturing, so making parts for the robot and also I'm part of the strategy team."

He's involved in figuring out how to score, the defense options and other strategies to consider when building the robot. Easterbrook said he is already thinking about strategies for next year.

Being a part of the robotics club has influenced his future career aspirations.

"It's been one of the biggest influences on my job choice. So before I came into high school I knew I really liked science ... but I wasn't 100% sure what I wanted to do," he said.

"After this I'm planning on probably becoming an engineer in mechanical or environmental ... If engineering is anything like it then I want to keep staying in it."

The team thanked local sponsors and families for their support over the season and said they hope to continue the winning tradition next year.