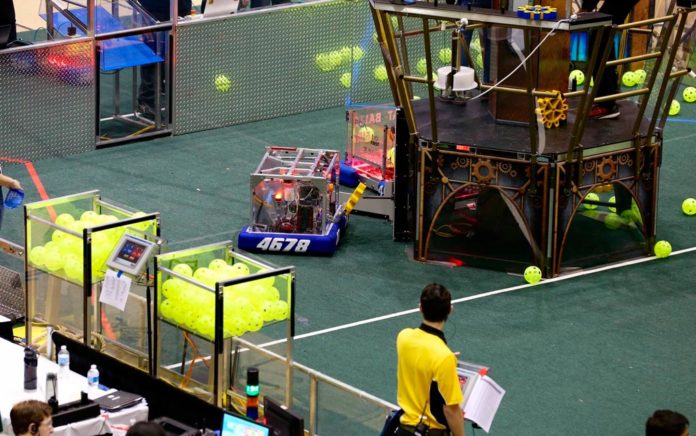 CyberCavs take medal at University of Waterloo competition and are now preparing for district event in North Bay.

After a second-place finish this weekend, Woodland Christian High School's FIRST Robotics team has their eyes set on another top finish at district competition, then provincials, and hopefully, worlds.

The CyberCavs, as they call themselves, earned silver at the competition held at the University of Waterloo. They'll compete in their second district event in North Bay in two weeks.

Roughly 45 students make up the team.

Waterloo is notorious for being the strongest competition for FIRST robotics in Canada.

Last year the team made it to the quarter-finals in Waterloo, the finals in Windsor and they got the wildcard to go to worlds. They finished 28th in the worlds out of approximately 4,500 teams.

This year they play two district competitions. If they do well then they move on to provincials, and from there to worlds.

Josh VanPelt, the operator who controls specific parts of the robot, explains that every year FIRST releases a new game and teams have six weeks to build a robot, which will maneuver around the game.

"This year there were two things you could do. One was picking up wiffle balls and shooting them into either a high goal or a low goal, or you could manipulate by gears and then you've got to transport them from one side of the field to the other, to be lifted up and put into a system of cogs," VanPelt said.

Travis Over, the driver who controls the robot, says last year the difficulty was in the actual game, while this year it was more about the players. And there are always challenges you can't fully anticipate.

"They have these big huge containers of 50 wiffle balls each and when they get dropped they're supposed to drop into your bot or you can pick them up off the ground if you have that capability. But there's two of them, so when you deploy one of them, the other one goes down to the floor and so that means if there's balls in the corner it becomes difficult to do things," Over said. 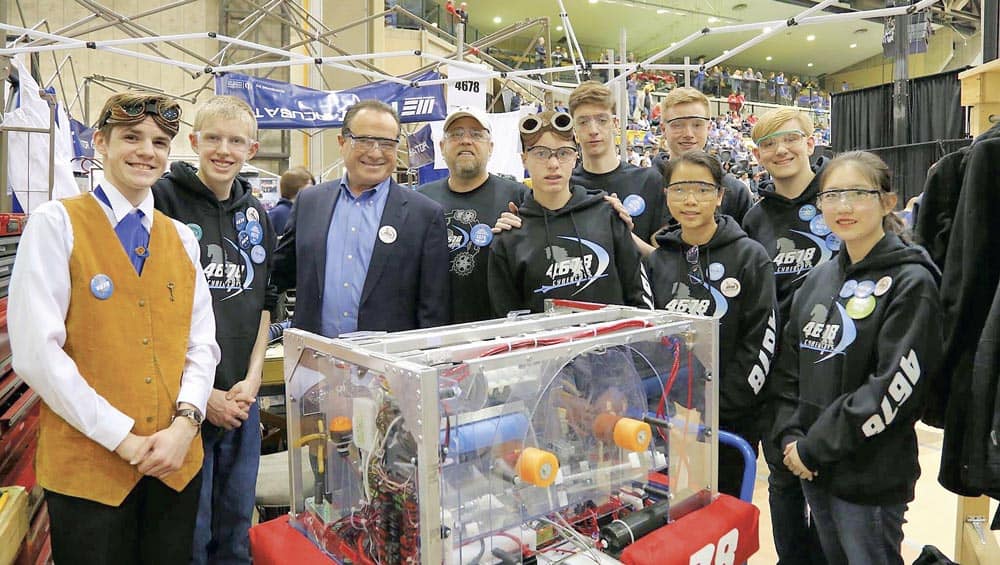 There's a round robin of qualification matches for the first day and a half and after that there's alliance selection, where three robots end up on an alliance together which is chosen using a team captain system.

They were chosen by St. David Catholic Secondary School to be on their alliance. The two teams had worked together before because Woodland invited local teams to some practice sessions over March Break, which St. David attended.

The team has six hours between now and the North Bay competition to get their robot in working condition.

"At the very beginning our modem was toast," said Joel Deen.

Deen is a human player in the competition. One sits in the airship, and Deen puts the balls or gears into play on the field.

"In the last probably three matches there was a lot of defense being played and we had a few problems with the robot, so it's very battle damaged," VanPelt said.

Over hopes that as the driver he can make the process more efficient in the next competition, which will come with practice.

They each explain what the appeal of joining the robotics club was for them.

This is Deen's second year in the club, as a Grade 10 student.

"My brother joined the robotics club in Grade 12 and went to the Waterloo event in 2014. When I saw that I had a pretty good understanding of what I wanted to do, so when I came to selecting what clubs I could choose, robotics was at the top of my list," Deen said.

Over decided to joined the club for his Grade 12 year.

"I kept on popping into meetings every once in awhile in prior years and finally decided I would just join it after some nagging from people. All my friends were in it but when I did get into it I really stepped into a priority role, which was the driver. And I found that I really liked it so far," Over said.

VanPelt has been a part of the club from Grade 9 all the way up to Grade 12.

"I've always been interested in robotics as a whole, technology. I had some friends from older grades already in it, so I just sort of naturally joined into it and over the years I've become more involved in it," VanPelt said.