Underdog school shoots for the top in robotics 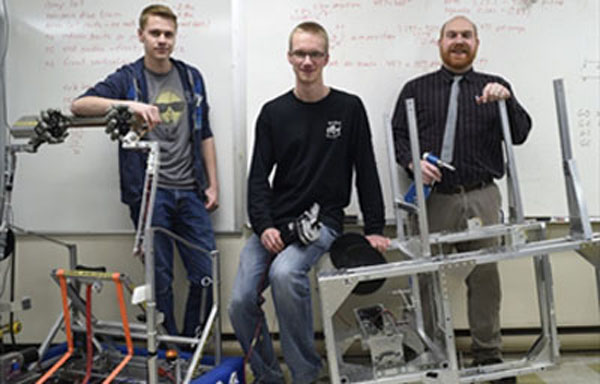 BRESLAU — They may not have backing from NASA, big­time corporate sponsorship, a huge budget or thousands of students to choose from.

But with ingenuity and some gumption, the robotics team at tiny Woodland Christian High School in Breslau have earned their way into the world championships in St. Louis at the end of the month.

Woodland's Cyber Cavs, in only their third year of competition, won that right by beating all others at a regional qualifier in North Bay, with a robot inspired by a common piece of farm equipment — a hay bailer.

"I think we've come a long way for such a small school and a new team," said math and sciences teacher Jen Vanderkooy, and one of the team's coaches.That's an understatement.

The team of about 20 students, with the help of two coaches and a group of mentors who donate time and parts, beat much larger schools with much more established robotics clubs to get there.

At the FIRST Robotics Championships April 22 to 25, the crew from Woodland will compete against more than 600 teams from around the world who will cram the floor at St. Louis' Edward Jones Dome, home of the NFL's Rams.

The small, private school of about 320 students will be up against robotics clubs with some major corporate heft behind them, from Fortune 500 tech firms to energy giants. One club is supported by the U.S. space agency, another gets thousands of dollars and engineering help from a global automotive company.

Woodland worked with a much more shoestring budget, and mentors who had backgrounds in farming, carpentry, computer coding and machining. They took that underdog mentality and surprised everyone by winning in North Bay.

"People haven't really expected us to win," said Nat Stroobosscher, a Grade 11 student who is the robot's "human helper" during competitions. "But we knew we were good enough and that we belong there."

The road to Missouri has been filled with countless hours in the school's workshop, testing bouts in the drama room, followed by short bursts of high­intensity competition.

After months of planning, testing, building and tweaking, the team took their robot to acompetition at the University of Waterloo, and then North Bay. The challenge was to build a remote­controlled robot that could stack as many plastic totes and recycling bins in two minutes and 15 seconds.

In front of a live audience, they had to make repairs to their robot on the fly, kind of like a NASCAR pit crew. And they had to score as many points as possible before the buzzer sounded, under the eye of referees looking for the slightest infraction.

"It's a very fast­paced two minutes and 15 seconds," Stroobosscher said. "It's like one of those intense basketball matches where you have to get a three­point shot to win the game."

The team at Woodland built their 55 kilogram robot to rigid specifications in just six weeks.

"I'm proud to be part of this team, and I hope that this success will inspire future students to join the CyberCavs at Woodland"

Actually, they built two — which allowed them to tweak their design on a practice robot after their first robot had to be stored off­limits, according to competition rules.

The big win in North Bay has got the school talking, and team members hoping younger students will pick up the torch year after year for the budding club.

"I'm proud to be part of this team, and I hope that this success will inspire future students to join the CyberCavs at Woodland", said 17­year­old Grade 11 student Matthias Mostert, whose job is to gather information on the robot's rivals during competitions.

Just getting to the world championships is rewarding enough for his small school, he said.

"We probably won't win, but the experience of a robotics competition on that scale will be memorable. We can learn something about mechanics, design of the most successful teams in the world," he said.

Vanderkooy, who handled fundraising and promotion, said the robotics club gives students a chance to feel a part of a team.

"The kids we get are typically not kids who are involved in organized sports. But this is their niche, and it's so something they're good at," she said. "It's a cool opportunity to work together with kids who think like they do. It's what they love doing."

Matthew West, the team's other coach and a math and computer science teacher at Woodland, said the club teaches the teenagers valuable skills, from riveting and electrical wiring to computer assisted drafting and finance.

"There's a lot of room for everyone, and it's not just for those who are mechanically minded," he said. "It's been fantastic. It's kind of the way you'd wish every class would be."